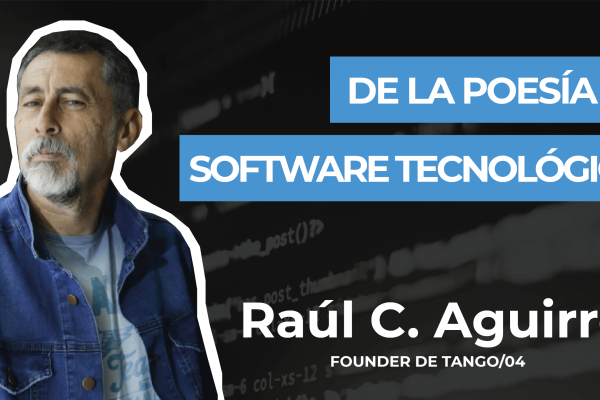 Continuing with the cycle "B-Talks - Entrepreneurial Success Stories," in this fifth meeting we had the pleasure of interviewing Raúl Cristian Aguirre, founder and CEO of Tango/04, a multinational software company with offices in six countries and clients such as Nike, BBVA, and Banco Santander, among others.

In 2016, Tango/04 became the HelpSystems headquarters for Southern Europe and Latin America, taking advantage of the Tango/04 Group's experience in these regions and expanding the offer to continue helping IT teams achieve their business goals.

Raúl Cristian Aguirre is a graduate in Computer Science, EO/MIT, Entrepreneurship Master Program and the Higher Institute of Morphopsychology, he is also a designer of award winning technologies and products sold in more than 50 countries. He is also a poet, writer and radio producer.

In this meeting, directed by Luis. I Cortés, Aguirre shows us the life of the entrepreneur from his most poetic and humanistic side. If you had some predetermined concept of what it is to be an entrepreneur, Raúl tells us about it from another point of view.

"In my case, success is about getting a good night's sleep", that's how he defines it. For many (or what is commonly accepted) success means having a company with a lot of income. For him, sleeping well and being able to manage his energy is the key to success.

Aguirre believes that success, besides being an external issue, is something extremely uncontrollable. "We can do things very well, but there is one factor that is fundamental, luck". And he adds: "Sometimes things go very well and sometimes very badly. And you have to accept those things because they are part of life".

HOW AN IT POETRY BECOMES AN ENTREPRENEUR

"One of the things that has helped me to manage all this is art, for me it is absolutely therapeutic". Raúl Aguirre comes from a very poetic family, and suddenly (fortunately or mistakenly) he went to university with the idea of becoming a psychoanalyst and ended up becoming a systems analyst.

"I think that was a stroke of luck, I was able to bring together all that information I had from the most artistic sensibility and computing. I feel that I've been a much better technician because of all that humanistic baggage I had," he admits.

Raúl was working as a programmer in a company in Barcelona and to speed up the process of his work, he created a tool to help him. "One of the things I have as a virtue is that I'm very lazy, so I created this program to be able to work less", he says.

And that's when the light went on. If that tool helped him, why not the others? From then on, Raúl began to promote it and people did not stop buying and he refers to the following phrase: "There are companies that arrive late at the market, others that arrive too early and others that are lucky".

Raúl considers this to be a stroke of luck. "It is clear that the market was just in time for me to succeed in what I started to offer. I didn't want to be an entrepreneur, now that I know, I say 'oops, I'm glad I was'". And he adds: "I think that entrepreneurship is growth. You can't make a company grow if you don't grow. You can't be a better entrepreneur than a person".

WHAT ABOUT RAUL AGUIRRE IN TANGO

Raul believes that there is a lot of him in the company and talks about connecting with others, being sensitive and taking others into account. "I think it's a wonderful competitive advantage.

"The leader is the one who sets the path and the vision, people expect that and I think every company has the stamp of its leader. Especially the vision. It's fundamental for a company, it's its DNA," he says.

Tango was dedicated to making its own software and at one point, they began to distribute third-party products, but he admits that the relationship with the owners was terrible. "There was a lot of incompatibility of values. Customers were seen as numbers".

"The customers didn't like the treatment very much. It was a relationship that didn't let us sleep well. The only thing you have to do with a client is to treat him well, then the money comes".

So, later they stopped distributing that product. "The fact that the company has seen that we prioritise values makes people more motivated". And he says: "when you put your money where your words are, it makes you very credible and people take it differently".

Aguirre thinks this was one of the best decisions they ever made. "When we wanted to sell the company, it was easier to sell it with our own products than a company with third-party products".

A decision made from the point of view of heart and values made them more money. "If you do things right, and you are lucky, the money comes. We have been running the company for 25 years," he says.

WHAT PEOPLE SAY ABOUT YOU

Raul believes in accepting what people are saying about what you do. "The market in the end is people. What they are telling you, you have to listen to it".

On the other hand, he emphasises the great entrepreneurs such as Steve Jobs and alludes to the fact that many think he is a genius and was born that way. "It's a lie. All skills are trained," he says. "I had no idea I was going to be an entrepreneur. I had a company for 25 years and sold it successfully, but I wasn't born with this".

Indeed, he admits that he brought things to the table and that perhaps the company was different because he felt different. "He managed it differently. And that's okay, because that connected me and others. But I wasn't born an entrepreneur. For me, everything is trained".

And he finishes: "I think that successful entrepreneurs are people who listen a lot".

Raúl says that there are personal things he has never given up just because he has a company. "I find it hard to wake up early, my most creative work is at night. I used to arrive at the company at midday and I've never stopped doing that". He adds: "I've always managed energy the way I felt my energy was working best".

You have to be different. "If you create a company it's because you have something different to contribute. If ideas were absolutely rational and logical, everyone would have great ideas".

"Successful companies are because in principle it doesn't seem obvious or even a bad idea", he explains.

"The team is everything. As the company starts to grow, the best decision you can make is to surround yourself with the best people possible".

"I believe there are three functions of the CEO: setting the vision, getting the team and motivating".

"For me, what we did well, from the beginning, was to get the best possible talent. Sometimes we did, sometimes we didn't", he says. "If you see talent, let it come. And if it's not for this position, it will be for another one".

THE SALE OF THE COMPANY

When the company began to grow and internationalise, they had several proposals. But there was one very tempting one in 2009 that offered a number with many zeros. Even so, Raúl believed that this was not the time to sell. He was very enthusiastic and it gave him a lot of energy to go to work. "To have sold at that time, I think it would have been a mistake".

Years later, Raúl realised that he had not written his poems for over 20 years. Everything was absorbed by the company. "I came to computing by chance, it was not my original life passion and there came a time when I had grown tired of it". There, he thought that the best way to continue was for the company to be run by someone else.

After looking at several offers, they decided on the company that had offered them the purchase in 2009. "I was convinced that it was a good option for the company".

AFTER THE SALE, IS RAUL NECESSARY AT THE COMPANY?

"No one is indispensable", exclaims Raul, referring to the example of Steve Jobs. "The company followed", he says.

"I think that many times the entrepreneur is afraid to let go. They are not able to imagine themselves without the company. But companies can work. I think it's more myth than anything else".

"One thing is what you are and another is what you do", explains Raúl. I was very clear that he was something else and not the company. "I had been a tourist for two years, the company was working without me", he says.

And he tells us: "When the sale was signed, I said the next day: 'it was a pleasure' and I came back just once to say hello. They didn't call me back, because they had a team that was managing everything well. I am proud of it. I created a company that didn't need me", he says.

HOW TO PREPARE A TEAM FOR THE TRANSFER

"One of the reasons they bought us was because of the team," he admits.

"It's quite conflicting. Imagine that you are many years with a management and they say 'tomorrow another one is coming'. People don't know what's going to happen. It's uncertainty. I like it, but many people don't," he admits.

However, Aguirre had good answers to that uncertainty. He wanted a company that would continue with the project. A place where people are well and values are maintained. He says: "A year ago I was in the company, and they were all the same faces and super happy".

"The process is long, tedious, boring, requires a lot of energy. Each thing that they find is less value of the company, but having a position of strength, allowed us to negotiate", he says.

THE RETURN TO POETRY

Raúl Aguirre has already published two books since the sale of the company and has more to publish. "Poetry does good. It is something that fills me and I want to share it".

He is currently putting on a show to try to bring people closer to poetry. "Always at the moment you are in your life, there is going to be a poem, an author, who is going to help you, inspire you, encourage you, console you, accompany you and give you courage. Poetry is extraordinary", he says.

Aguirre believes that poetry should be one of the hobbies of any leader. "When you are a leader you have to communicate. Language is an extraordinary weapon. If you use it well, you have a lot to gain. Poetry teaches you how to use language".

In 2017, Raúl Aguirre gave a TED Talk: The Cocktail Effect, where he talked about how you can achieve extraordinary results, without any extraordinary competition. Simply by mixing ordinary skills. "It's the recipe of any successful person", he says.

And to finish he says: "I want to do another one that talks about how poetry can help you be a better manager. I think it can be very interesting and can help many people sleep better".

Leave your comments below!