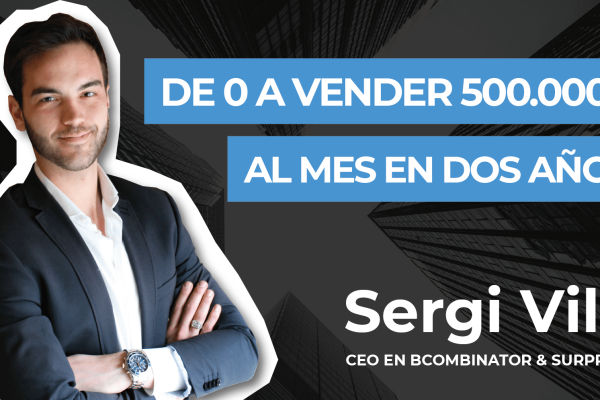 In the last B-Talks meeting, we connected with Sergi Vila Costa, CEO of Surprisit and Bcombinator. Previously, he was co-founder of Flykube, the surprise travel company which, with €10,000 initial investment in the project, in less than two years managed to scale the business to 4 countries and more than 100,000 customers, billing more than €500,000 per month. Subsequently, he sold his share of the company to his partners before the pandemic began.

In this interesting talk, led by Luis Cortés, Sergi tells about his beginnings, the challenges of being CEO, how is the methodology of Bcombinator's new incubation program, and the investment landscape.

Sergi Vila defines himself as a generalist profile, he assumes to be a person who knows "a little bit of everything and a lot of nothing" and sees this as a benefit, as he considers that these are the skills of a CEO. He has liked the startup world since he was in college since studied business administration specializing in technology.

His first project as a startup was Travisy, an app in which with artificial intelligence you could plan your trip in 10 seconds. They managed to close a small investment round and reached collaboration agreements with large companies such as Booking and Skyscanner. The latter saw them as competition and ceased relations. Finally, the startup was not scalable and they pivoted their project to what was called FlyKube.

At FlyKube, Sergi served as CEO and CMO. With an investment of €10,000, he expanded his business in Spain, Italy, France and Portugal. He raised €400K from Venture Capital and Enisa and grew at a rate of 15% per month for 2 years. "FlyKube grew like a rocket, in less than a year we reached €100,000 a month turnover and without investors in between", he says.

Later, in November 2019 and prior to the pandemic, Sergi decided to sell his shares to FlyKube's partners as their visions were not aligned. "They with the turnover that was around half a million a month, they were fine. I wanted to grow the project much more. I wanted to open more markets, launch new products and turn FlyKube into one of the big players in the leisure and travel sector," he explains.

Today, in addition to being CEO of Bcombinator, he has replicated the Flykube model in the United States under the Surprisit brand.

If you had to talk about a failure

"When you are an entrepreneur you fail and succeed every day," Sergi accepts. "You just have to weigh the magnitude and the learning from that failure, as well as the successes, so you don't get too high".

Vila confesses that one of his biggest failures was the lack of a partner pact when he started his startup. "That's chapter one of the entrepreneur's handbook, but at that time when we started we didn't know that handbook".

How to set up a company when you're not a technologist.

"For me a CEO usually has a generalist profile. He or she may know about finance, economics, design, marketing and sales." And he continues: "A good CEO knows a little about a lot, but a lot about nothing", and explains that these "a lot about nothing" are complemented by a CTO or a CMO, depending on the area. "For me it is key that a CTO frees you from that part, but that also has other challenges".

Sergi explains that many startups put a programmer as CTO who has no experience in the position and fix 30% equity and that, as it grows, is something very expensive. "At the beginning there are projects that do not need a CTO, it makes more sense to outsource the MVP and when you already have some traction, decide whether to incorporate the figure to scale the technology. But that CTO figure should be complemented by a technology director with business vision, not a senior programmer with no business vision".

The ability to succeed in different sectors

"I like to surround myself with experts who know the market I'm going to enter". Vila considers himself a very curious person who likes to read a lot. "I try to combine self-learning, reading everything I can find on that content, and surrounding myself with experts in that sector", he explains. "I want to find what is the problem that people have or don't yet know they have and build a solution around that".

How they manage to differentiate themselves with FlyKube in a market that could seem saturated.

"In Spain there were two very clear leaders, and it seemed very complicated to enter. But they saw an opportunity in Italy and Portugal, where there was still nothing like it. "Within a year we had 60% of the market share. But, above all, the differentiating factor was that we saw that competitors were focusing on optimizaing operations and technology. We saw that the important thing was to build and scale a brand around marketing, product and user experience. The revenue data from both companies proves that the strategy was the right one."

At FlyKube they prioritized growth over optimization. Competitors were closing rounds of investment and were spending it on integrating with airlines and fine-tuning margins, while they were fine-tuning a lot of revenue growth.

"We put a lot of importance on community. Instagram, in our case, was our growth engine, where we went from 0 to 250,000 followers among all social networks in just a year and a half. In the end, we managed to create a brand that perhaps the competition did not have as strong. We focused much more on growth and the others on optimization".

What is the strategy to continue demonstrating value to investors?

He adds: "I think that to get to that point you have to have demonstrated on a small and medium scale that the model works. But that you have losses because you are prioritizing growth, so that they will sustain that growth".

"I think there are many types of investors. The investor who is going to bet on you, if you don't do that kind of strategy, he wouldn't bet on you either. You have to choose the strategy you are going to follow and find the best investor for that type of strategy", he explains.

How you see the investment landscape in Spain

Spain as of 2018 crossed the figure of one billion invested per year in startups. "It has grown year by year and the size of investment funds has also grown a lot. In that sense, we see that investment funds are getting bigger and bigger".

At Bcombinator the philosophy is born around this situation. "We seek to cover that, between know-how and capital, that the entrepreneur goes from an idea to metrics and that it is already investable by larger VCs".

Bcombinator Venture Partners was born from the union of what was Xerpa Valley, a Venture Builder founded by Jordi Martín, Miquel Mora and Sergi Vila. It started with the pandemic, as they saw that there were many opportunities because of the Covid-19 issue: digitization of sectors, changing economic dynamics, etc.

"The three of us learned a lot", says Sergi. Along the way they met Erik Brieva and Luis Cortés, shared with them what they were doing and realized that they all had the same vision.

Based on working together, they created what Bcombinator is now. Which, on the one hand, is a very competitive startup program. "The program is a hands-on MBA to create companies, where you not only don't pay, but you get paid to do it". And on the other hand it is an investment fund.

The program consists of 50 modules, where you enter with your team and advance until, on Demo Day, you can present yourself to a network of investors to close 100, 200 or 300 thousand euros in the seed round.

"The difference we have with other incubators or Venture Capital, is that we focus a lot on providing a lot of know-how resources to these entrepreneurs. Not just in monthly meetings, but on a day-to-day basis".

Not only is the Bcombinator program very powerful, but each startup starts with three mentors on top of them. One is a mentor who is an expert in his or her sector, then another lean methodology mentor and finally a technology mentor.

The program is accompanied by workshops, events and podcasts to highly inspirational entrepreneurs. In addition, the fund itself (Bcapital I) invests 20 to 30 thousand euros in the middle of the program so that they can launch their project and have metrics.

Bcapital I, the investment fund of Bcombinator

Bcapital is an investment fund that has two phases. "We are now in the pre-seed fund and preparing the seed fund," explains Sergi. This fund will invest tickets up to €50,000 and the second will invest from €100 to €200 thousand per startup.

"Our goal is to create a practical school of entrepreneurship that, when everyone thinks about creating a startup, think that in Bcombinator is easier," says Vila.

What are the main areas where they are going to help create companies?

"The good thing about this network of entrepreneurs is that each project is studied by a person with expertise in the subject", he says. "It gives us a lot of 360 when it comes to choosing. Although our focus is on a very deep technology component. But we are also interested in mass B2C".

How is the startup team managed?

"What we do in the teams is to understand the skills of those people. A lot of times the future entrepreneur we work with already knows where they are failing. But then we focus a lot on giving the vision of what the complete team would be".

How is the methodology

The incubation program is divided into four stages.

In this phase they focus on the Founder Fit and the ideation phase. A lot of work will be done on the Founders, the Cap Table and what profiles are missing.

2- The Problem Solution Fit. Where the problem is analyzed with many tools and the solution is worked on. Many MVPs will be created to understand which one is the best.

Once this phase is finished, entrepreneurs are offered an investment of 15 to 30 thousand euros. This is to develop that product and launch it to the market to get the first metrics.

3- It focuses on creating the MVP, the feedback, measuring, learning and modifying until the product has a somewhat definitive version. Here the Early Adopters Fit appears and the project starts to be more investable.

4- Here they enter the Demo Day. This is an internal event, to which external investors from all over Europe are invited. At this stage, the startups are presented and each one will have five minutes to make its pitch.

If you were to go back years, what would you say to yourself.

"In some startups I have set up, I would tell myself to choose other partners with a more entrepreneurial profile. On the other hand, to enter an incubation program, like Bcombinator. Because there you learn by doing and you have people who will tell you what to do".

Finally, Sergi says: "If you are young and have no experience in this, ask for advice, because entrepreneurs love to give advice".