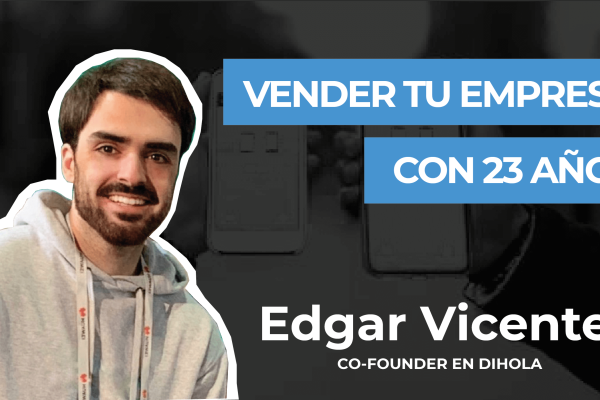 We start the 2021 season of B-Talks and its Entrepreneurial Success Cases with the participation of Edgar Vicente, co-founder of DiHola, an application that allows the exchange of data between two people with just a smartphone crash, and that was acquired by Social Labs in 2020.

In this interview, conducted by Luis I. Cortes executive at Red Hat and partner at Bcombinator, Vicente tells us about his experience as a young entrepreneur, how DiHola was born, the success of his team, the change of business model, and the sale of the company.

DiHola was founded in 2017 by three young university students, Edgar Vicente, Iván Fernández, and Juan Sebastián Brito, with the aim of eliminating business cards in professional and networking environments, but with the goal of encompassing both professional and personal relationships.

"With my colleagues we attended many, many events and we saw a problem that I think someone has seen it, but did not execute it well and we could have the solution," says Edgar. Handing out personal and physical cards in a world where everything is digitized seemed like a no-brainer to them.

In early 2018, they started with an MVP and then kept improving. In August of that same year, they had already created their own algorithm that, through software, allowed them to make data exchange with just a "mobile crash".

Subsequently, they entered an accelerator that helped them to make a leap in quality and an introduction to the entrepreneurial ecosystem. They managed to raise a round of 200 thousand euros and in 6 months they began to professionalize the company and to have collaborators.

DiHola had a B2C model. The main objective was to generate as many users as possible. Then, billing would come when a monthly fee was charged with a subscription. But they ran into a problem. "What we saw is that people were using it for free, but there was not enough market fit to monetize. They preferred to do it analog. We were scaling well, but we weren't converting to paid."

As a result, they set out to offer the same solution within the corporate (B2B) world. The idea was to digitize professional cards, focused on the business world, so that corporate employees would have this digital card. "We started testing, working very close to the companies and there it seemed to make sense."

Later, at an event they participated in Turkey, they met the Head of Technologies of one of the most important banks in Pakistan. This person asked them if their technology could be applied to transfer money and they did. "We started to apply it in the bank's app so that users in Pakistan could exchange money by simply tapping their cell phones, as a verification process," he says.

In this integration process, DiHola signed a "quite interesting" contract, according to Edgar. "This could generate us a revenue and a much more scalable model than the one we had. But in parallel we were continuing with B2B testing."

At that point, the DiHola team entered a point of indecision. "B2C doesn't make sense," Edgar explains, and they eliminated it from the plan. "Either we do B2B by offering digital cards or we are a provider of mobile process verification technology," says Vicente.

During the indecision process, Social Labs, one of their investors and a company dedicated to offering digitalization solutions to large corporations, appeared. When they saw that they had left B2C aside and started to provide technology, they decided to make them an offer.

Edgar Vicente says that they had never contemplated the option of selling. "The idea was to keep raising rounds and live on an increasingly higher salary." But it all started to get a little fuzzier when B2C didn't work out and they had to change their model.

"We listened to the offer and assessed that it was enough to accept it and move away from the new model of providing technology. We decided it was more worthwhile and move on to something else," Edgar says.

He admits: "After three years, the founding team's strength was slacking. We were increasingly skeptical. At 23, we thought it was a good option and we did it."

The process of selling the asset took three months. It began in late 2019 and materialized in early March 2020. "It was very fast, there was a lot of trust and good communication," Edgar says. "Everyone's interests were very clear, it was just legally adjusting the exchange."

"The team took a super relevant role. First, in the face of the adversities we faced and the flexibility we had to adapt to them. We were young, we lived with our parents and we could afford to face bumps. Perhaps another entrepreneur, in other economic situations and with a family behind him, would not have been able to cope," he explains.

Edgar says that being able to go through all these problems made them extend the project. "At the first or second change, seeing the little money we had, we would have abandoned it. But we didn't stop trying. The best thing we had was resilience," he accepts.

On the other hand, in terms of talent, Vicente says that they were very lucky. "We got together with a colleague, Juan Sebastian. He has an innate talent for programming that I had never seen before. He did all the algorithm, the app, and the technology by himself. A kid from UPC in record time, in less than two weeks. Without his talent, we couldn't have done this," he exclaims.

Prior to the cancellation of the Mobile World Congress, the DiHola team attended an event the same day Expansión's news broke. Everyone congratulated them. "It was very gratifying," says Edgar. "It's three hours of glory but then when you come down from that overdose and the moment is over, there are a lot of issues to resolve. On a legal, personal and professional level. You cut through the whole routine, a new phase begins. It's like your first day of a new job."

If you could go back in time…

"If I could go back to the past I would tell myself to focus more on billing than raising money. I always think about the time I wasted. It affected me on a personal level. When you get a response from an investor who is not interested, a cancelled meeting, a ticket that falls through," he confesses.

"Today, what I tell entrepreneurs, as far as I can give advice, is to focus on invoicing and closing clients," he advises.

You can see the complete video here: