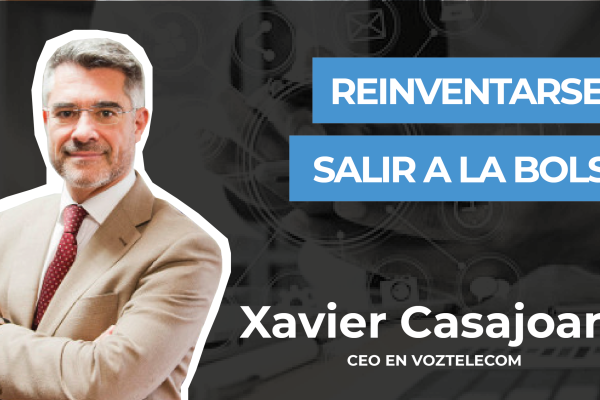 In the third session of interviews with entrepreneurs, we shared a talk with Xavier Casajoana, CEO of Voztelecom (recently acquired by Gamma).

In this interview, conducted by Luis I. Cortes Executive at Red Hat, partner of Bcombinator, business angel and advisor, Xavier explains how he has led VozTelecom along 17 years, taking it through a path that for many is a dream.

Xavier Casajoana has been able to create an innovative company that has been able to grow with the right mix of private and institutional financing. He has listed VozTelecom on the Spanish Alternative Stock Exchange (MAB) and has subsequently led a sale operation to Gamma Telecommunications, a public company, an international leader in telecommunications. In this dialogue Xavier shares this path, what have been his main challenges and the lessons learned from the history of VozTelecom".

VozTelecom is the largest Cloud PBX company in Spain, apart from the main fixed and mobile network operators. The company serves end users directly and through a network of wholesale partners, franchises and distributors.

VozTelecom was created in February 2003 by four partners who already had professional experience and came from the world of internet and telecommunications. "We saw the opportunity to develop a business that did not exist which was IP voice and we visualized it", says Casajoana, CEO of the company.

The company's idea was to develop technology that did not exist at that time, with the aim that operators could offer IP voice to their customers. But its business idea changed radically in 2008, when it became a business services operator.

How do you get value out of something that is already a commodity?

In February 2003, when the company was created, there was no Skype. "What we visualized at that time was that Internet telephony, or voice over IP (VoIP) was going to become one more application in the Internet ecosystem, since there were very few applications that used voice," he says.

At that moment, Xavier and his team saw that opportunity. "The important thing is not the technology you use, but what customer need you solve", he exclaims. Although over the years voice over IP has become a commodity (with applications such as skype or WhatsApp as examples), what has remained and what defines VozTelecom is the need that companies and their professionals have to communicate with customers and suppliers with advanced and reliable tools that suit their work environment.

How they get to the product

"In our case, circumstance and necessity take over", admits Xavier. The company was founded with self-financing from the partners and their challenge was that they had cash for 12 months. That was the time they gave themselves to create the technology, the first solution and get more financing.

In 2004 VozTelecom got its first client, and later signed contracts with operators in Europe and Latin America, developing that business model until 2007. The revenue components were that an operator bought the service, paid a start up fee and a monthly fee for the service.

But when it came down to it, the business was not growing at the pace the team wanted. "The operators did not provide a relevant volume of customers that would allow us to have sufficient recurrent income. Even though they ended 2007 with a great result - 25 connected operators - they were concerned that they were generating a low level of revenue and with no visibility of when these operators would bring in more customers. "Each one had a different customer target and a very different motivation. It was difficult to include that dynamic," Casajoana admitted.

"In 2007 we realized that we had to reinvent ourselves or close down". Casajoana confesses that none of the platform's clients went aggressively to the market to offer the service, since they wanted it only in a defensive way, to be prepared in case IP telephony was a success, but they did not consider it a strategic bet.

From that reading, the team came up with the idea of becoming an operator, to offer their service and be masters of their own destiny. "We have the technology and we know how to do it," Xavier encouraged himself.

"We decided to stop being a company that creates technology for operators, to create our own product, in order to develop and target SMEs and offer them good customer service support", he said.

"We have invested a lot of money in the company as fortunately we were able to get the capital," admits Xavier. They knew that if they entered a market as immature as that of IP telephony, they could not consider scenarios of profitability in the short or medium term.

"Our objective, when we became an operator, was to become the first cloud communications operator in Spain and be the market leader", explains Casajoana. That was his goal and ambition, and it still is. "We achieved it and we are still the market leader, after the 5 traditional operators", he remarks.

VozTelecom started with Friends, Fools and Family. It was a first round of seed capital, where they raised both public and private funds and three shareholders contributed 600,000 euros to the company.

When they made the change of model, between 2006 and 2008 they had a new investor who contributed 1.5 million euros to the company, after which they turned to growth capital. This funding allowed them to change the company's business model.

Two years later they made a new round of one million euros and later they spent five years with the company financing themselves with their own positive result. Between 2008 and 2010 they started to become profitable, until the market started to grow more than they could cover and growth started to slow down.

In 2014 VozTelecom started to develop a new growth strategy. "We had grown up with a strategy based on the distribution channel, but we also saw that this model did not scale up for the next five years and there we designed a new growth plan".

The new plan was to develop a network of franchises specialized in bringing the services to the SMEs, one hundred percent dedicated to the marketing of VozTelecom, brand investment and demand generation by the company. "That required a financing and we had to resort to new investors", admits Casajoana.

"That was when we saw the opportunity, and we made the jump to the Alternative Stock Market (MAB). It was a good opportunity to become a listed company and thus give entry to a different type of investor to venture capital, which allowed you to have a more medium and long term vision to undertake operations of purchase and acquisition of companies", he adds.

Seeing that the MAB was their best option at that time, they raised 3 million euros from investors on the stock market and this supported the next stage of growth with the deployment of the specialized distribution channel.

The keys to the IPO

To go out to the stock market Xavier Casajoana highlights 3 key elements:

The success of the team

When Xavier Casajoana created VozTelecom, he believed that the most suitable was that the key positions in the company were occupied by partners. "I would never have ventured to create the company alone, that was very clear to me. I could have had the idea, but I didn't have the capacity to do it alone".

Soon his goal was to convince other people whom he believed to be good professionals and motivated them to join as partners and professionals in their area of responsibility.

"When you create a company you have to surround yourself with very good professionals who have their commitment aligned with what you want in the next 3, 5 or 10 years in the company".

Xavier Casajoana knew that at some point they would be leaders when the market matured in their segment, and that there would be someone outside of Spain who might be interested and want to buy the leader of that market.

"We were clear that potential buyers had to be companies like ours in other European countries or the United States", he admits.

"In addition to the financing itself to continue our growth, another reason we made the jump to MAB was because we saw that in order for a sale to occur in the easiest way possible, the best thing to do was to make the company listed, because in the end the most difficult thing is to get the shareholders to agree on a price. And he adds:

In 2016 they started to see that in Europe there were companies like VozTelecom that were gaining strong size in markets more mature than the Spanish one, like in France, Holland, Belgium and United Kingdom.

"From there, we naturally started to establish contacts with these companies to get to know each other. Before leaving for MAB we already had contact with five, six companies similar to us with whom we met in sector meetings in Europe and little by little we began to weave a network of contacts," he reveals.

Finally the moment arrived when these companies wanted to expand in the market and looked at Spain as an opportunity.  "From there we started conversations with some of these companies and the sale to Gamma ended up materializing".

The process of selling a public company

When the company is quoted, you must operate very transparently. You cannot establish negotiations or agreements with potential buyers that the market does not know about. "You have to be very careful, have good advisors to guide you to conduct this process without violating the rights of all shareholders".

"The buyer is clear about that scenario. There is also contact with management, and more so when they are partners and shareholders. Our responsibility was also to think and plan the day after. Given that some of the financial partners leave the company, what is the plan for the partners who remain in the company's shareholding? It's a factor that has to be worked out with the potential buyer," he adds

The evolution of VozTelecom in Gamma

"When someone buys a company with it, the team also comes, which is critical when entering a new market. Gamma invested strategically, so that VozTelecom could continue growing in the Spanish market, which could have more strength, especially financial, and know how", explains Casajoana.

"Gamma's objective is that we continue to be in front of the company, and committed not only to VozTelecom but also to a joint project, contributing and gaining customers, growing and consolidating a market".

"Gamma and we have a long term commitment, which includes a period of permanence as the best way to join our destiny to theirs. VozTelecom will continue growing with our support as partners and managers, and we will bring value from here to Gamma as a leading telecommunications company", concludes Xavier.

Leave your comments below!

By Luis I. Cortés and Bianca Damiano