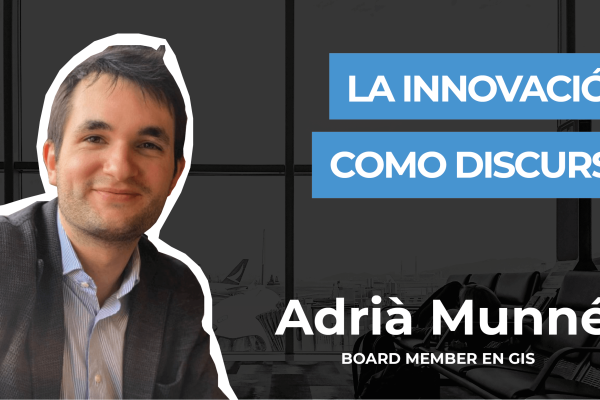 Interview with Adrià Munné, Board Member of Gestió i Serveis

In the fourth session of interviews with entrepreneurs, we shared a talk with Adrià Munné, Board Member of Gestió i Serveis (GIS) (acquired in 2019 by TAV OS).

In this interview, conducted by Luis I. Cortes executive in Red Hat and partner of Bcombinator, Adrià Munné tells us the beginnings of the company, how he joined it, the change of business model, how to make the company international, financing, among other anecdotes.

Gestió i Serveis (GIS) Trade Center operates VIP rooms in several European and Latin American cities, including four VIP rooms at Barcelona airport and owns brands such as Premium Traveler and HelloSky. On the other hand, TAV Operations Service, is listed on the Istanbul Stock Exchange and operates fourteen airports in Turkey, Georgia, Tunisia, Saudi Arabia, Croatia and Macedonia.

From the strategic point of view, the acquisition of this Spanish company served to grow the market of TAV OS in Europe and Latin America.

Gestió i Serveis was created in 2008 as a facility management and congress management company at the World Trade Center in Barcelona. In its way, it started to take on other similar projects such as real estate development or hotel and congress center projects in collaboration with Caixa Bank.

After the 2008 crisis, where the real estate sector was one of the most affected and many companies left, GIS survived.

In 2008 the Barcelona airport was building Terminal 1 and GIS presented a project where it proposed a congress center, ten rooms, five VIP rooms and a spa awareness.

"It was an innovative proposal. Nobody at that time was betting on it and it was quite easy to convince them", explains Adrià. The project had a ten-year term, with a large investment and it was at a time when the airport was not very popular. "GIS saw an opportunity there to diversify their business, since the real estate was in crisis", says Munné.

In 2012 the shareholders who came from the real estate sector, reconsidered their participation in the company and wanted to sell. Adrià's father, Josep Munné, bought 20% of the company. "It was a company that the business was not good, but I thought it could be interesting", accepts Adrià.

Adrià joined the company in 2015 to do a final project on strategic change. He knew that his father was having trouble doing so and that there was a lot of internal resistance from the team and partners, because they didn’t believe in the airport hospitality business.

"I did an opportunity study and talked to the team. I was very honest with my father and told him, 'this 20% can be lost in three or four years’. The Barcelona concession ended in 2018 and financially GIS was not good”.

In 2015, the main shareholder wanted to leave. Adrià and his father went out looking for new shareholders who believed in the business, but after a year they realized that they were not the right ones, so they were forced to buy 95% of the company.

"That's when rock and roll starts," he says. His father, who was 70 years old, took out a loan to buy 95% of a company that, according to Adrià, was scheduled to go into receivership in three years.

One of the great challenges is managing conflict when the personal and professional relationship is mixed. Adrià says that the level of tension was very high, that both he and his father have a very empathic character, share points of view and have a lot of dialogue.

"We had different views. But my inexperience and desire was combined with my father's experience and calmness. I think that was the success", Munné explains.

When the company has international projection

This was one of the reasons why the Munné family decided to buy. "Nobody believed in it, neither the partners nor the team". For them it was life or death, there was no other solution. "In the business of concessions you always have to win, because if you don't win the company ends".

A concession gives you the right to exploit a business for a certain time. "The day you win it, you're already losing that contract. If you stop the company and don't go out and look for new things, you can renew, but there is always the risk of losing everything in the renewal", says Adrià.

"We felt the need to look for projects and once we decided that we had to occupy the Spanish market, we started looking at Europe and South America". The Munné family saw an automated market without clear references or specialists in that sector. "That is an indicator that it was a space to grow and consolidate", says Adrià.

"The experiences I had in the countries were completely different," he says. They went with the idea of going international, but he admits that they were wrong in many ways.

"Sometimes we think more about positioning than profit and that is not always good," he says. According to Adrià, they forced it too much, taking too many risks, and had to go out in search of a partner to be able to assume the objectives they were not setting.

"Now we are changing the model and we are doing it with local partners. But in the beginning it was to take a plane, look for suppliers, lawyers, everything from scratch. It is not ideal. It was a bit unconscious”.

Innovation as a discourse

The market was at a time when airports were growing tremendously and the passenger was forgotten. The airlines were competing so much in costs that they began to pull out services. That's when GIS saw an opportunity.

"There were service companies we were competing with, but they weren't like us. That was the difference. Adrià says that the speech was what helped them get companies like Aena, Iberia, Vueling, LATAM, among others. "We achieved innovation in the speech of innovation".

On the other hand they had the democratization of the VIP rooms. They said: "the VIP rooms seem very premium, but we have to open the rooms to everyone. So that also liked a lot".

1- Offer service. "Where there is no innovation, there is no funding. But you do need cash for the start-up investment".

"One of the good things about buying a company that already exists is that it already has a financial track, the banks know you and it is an advantage". In addition, he says, "one good thing about this business is that everyone understands it. It is very easy to explain to a bank, more than a software".

When is the sale of the company considered?

"We considered selling two months after we bought," admits Adrià. The Barcelona model that they wanted to replicate, which was the one that ultimately worked, they saw that in the other markets they were not similar. That is, the concessions were smaller, the rent was higher. "The extrapolation of that model cost us," he says.

Then they realized that they needed a lot of capital and saw that the business was getting a little big. As a result, the company began to plan the entry of a partner.

How the search for a new partner begins

GIS went from 10 million in 2015 to 30 million in 2019. And they went from managing Barcelona airport to being in twelve airports in eight different countries, and employing more than four hundred people. "The growth was very fast, very complex, but we were showing that we could grow".

When they saw that they could really be an attractive company, they hired a Mergers and Acquisitions (M&A) company to help them in the process.

At the beginning of the search, two funds arrived: one wanted 100% and the other wanted 40%. When they were about to close the deal with the one who wanted 100%, they received an offer from their current partner, who wanted to buy 70% and wanted them in the business.

"They were what we were looking for, they allowed us to enter into an international partnership, with a network in airports (they build airports) and we stayed with the Turkish partner", says Munné. "He entered as a penalty kicker, one day earlier", he finishes.

How long did the process take?

Moments when he thought it wasn't going to work

"A thousand stories happened, many things. That was the problem with the partners we chose. They were industrial partners, who are already slower than financial partners. This was a subsidiary of a multinational, which was controlled by another French multinational. For the approval, we had to pass 3 boards", says Adrià.

What would I have done if the sale had fallen through

"With the pandemic we would be out," he accepts. "We knew we were a problem for the company, we knew we needed capital to cushion growth," he says.

He adds, "Startups can make a lot of money on a rounds basis, but a traditional company can't do rounds. It's done by bank credit or capital increase.

Management the day after

"We realized that there was no integration plan," he says. "You as a minority partner of a multinational no longer exist. It is true that there was very good intention and there is very good intention. But already in day-to-day decision-making, the CEO reports to other partners. You are no longer the one who decides. From one day to the next you realize that the company is no longer yours.

"Now I have to see how I'll get back. I like entrepreneurship and I am passionate about business, but I am also aware of how difficult it is," he says.

Anyway, he admits that he would not have such a bad time, with all he has lived and all the experience he has gained and says: "I would like to find a project, have a team and make it grow and have a vision".