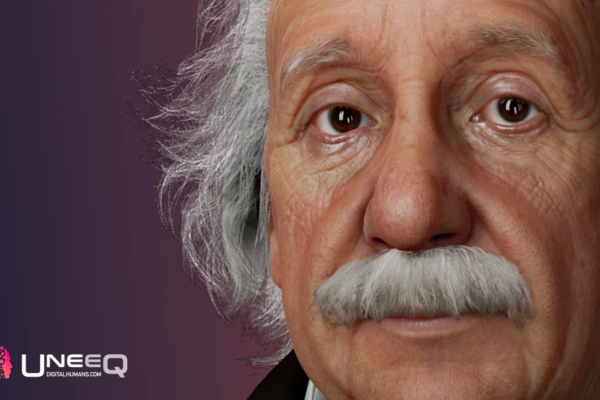 Barcelona/London based Aflorithmic re-imagines Einstein’s voice for a partnership with technology pioneer UneeQ to bring Einstein back to life as a digital human.

In 1921 Albert Einstein was awarded the Nobel prize in Physics. 100 years later, in 2021, the legendary genius inspires new generations once again, this time as a digital human. With an AI powered brain, a cloned voice and a video engine recreating his face, Digital Einstein is designed to be a companion for today’s isolated generation.

Aflorithmic created Einstein’s voice using their AI-based voice cloning. Starting with historical recordings of Einstein speaking, they looked at the physicist’s speech patterns, tone of voice and of course his trademark German accent.

“We analyzed Einstein’s voice in-depth based on the charming and noisy original recordings of the time.” says Timo Kunz, Co-Founder & CEO of Aflorithmic, and adds: “It was a challenge to create a voice that captures his inspiring personality and trademark German accent while not making him sound too synthetic and too 2021. Meanwhile we still needed to be able to add things like AI, Blockchain and Covid-19 to his 100 year old vocabulary.”

Countless movie appearances such as Walther Matthau in “IQ” or Einstein-inspired characters like Christopher Lloyd’s “Dr Emmett Brown” in the “Back to the Future” franchise have shaped an alternate character that people have in mind when they think of Einstein.

“Our Einstein still has a German accent and his speech melody, but he is much easier to understand.” states Kunz.

The Digital Einstein experience is a part of a broader digital human series from UneeQ, whose digital companions are able to communicate with people in a way that comes most naturally – using conversation, human expressions and emotional responses to best provide daily interactions that make a difference to people’s lives.

Digital humans are an ideal application for Aflorithmic’s technology. Pioneering the audio-as-a-service space, their API-based audio production service doesn’t only help creating purposely-built character voices. It can also edit and produce thousands of audio files and deliver personalised audio experiences to each listener.

Read the blogpost for more information on Einstein’s voice here

Aflorithmic is a London/Barcelona-based technology company. The platform enables fully automated, scalable audio production by using synthetic media, voice cloning, and audio mastering, to then deliver it on any device, such as websites, mobile apps, or smart speakers.

With this Audio-As-A-Service, anybody can create beautiful sounding audio, starting from a simple text to including music and complex audio engineering without any previous experience required.

UneeQ’s intelligent Creator platform is the global standard in digital humans, enabling the best creative minds to design and build amazing experiences. We give organizations the power to create real-time, human-like conversations that are more accessible and engaging. UneeQ is a global enterprise with a presence in the U.S., Europe and ANZ. For more information, go to www.digitalhumans.com and follow us on Twitter @UneeQAI.