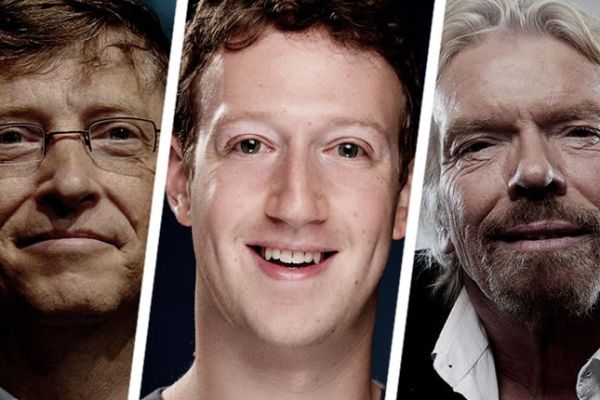 3 famous billionaires and their mentors

The mentor is a very important figure in the entrepreneur's career in all its stages. Even those who have reached the top have had the advice of experts.

Could we think that giants like Mark Zuckerberg, Richard Branson or Bill Gates transformed the world, do they did it alone? No, they didn't. Behind every entrepreneur there is always a good mentor.

Who was the mentor of the creator of Facebook? None other than Steve Jobs. They developed a relationship in the early days of Facebook; Zuckerberg spoke about the nature of their relationship with Jobs and said that "the bond they shared was deeper than breaking bread with President Barack Obama" and admitted that Steve Jobs' admiration for him was mutual.

When the CEO of Facebook asked him for help, Jobs' response was surprising. "He told me that in order to reconnect with what I believed is the mission of the company, I should visit this temple that he had gone to in India early in his evolution of thinking about what he wanted Apple and his vision of the future to be", Zuckerberg confessed.

Finally, he decided to take that journey and admitted that it served him to disconnect, reflect on his business and get in touch with a culture where people live in community. "That's what reinforced for me the importance of what we were doing and it's something I'll always remember," Zuckerberg said.

On the other hand, Steve Jobs confessed to feeling admiration and to value Mark's character for not selling the company but creating it and carrying it out.

"We talk about social networks in the plural but I don't see any other than Facebook out there. It's just Facebook. They have the control," Jobs said, when at the time it was only Zuckerberg's company that led the way in social media.

In addition, when Jobs passed away, Mark posted on his personal account, "Steve, thank you for being a mentor and a friend. Thank you for showing that what you build can change the world. I will miss you."

The creator and CEO of Microsoft also had a mentor, and that was billionaire philanthropist and investor Warren Buffett, CEO of Berkshire Hathaway. Gates and Buffett have been friends for 30 years. And, even though they didn't want to meet at first, they've quickly bonded.

They have also partnered in political and philanthropic ventures, and advised each other along the way. Gates admits that over the years he turned to Buffett for advice and mentoring, and several times referred to him as "one of a kind”.

Buffett recently celebrated his 90th birthday and Microsoft's CEO honoured him by publishing a video where he was seen baking a cake with the Toy Story song, You've Got a Friend in Me, and noted, "of all the things I’ve learned from Warren, the most important thing might be what friendship is all about”.

In addition, he quoted his friend: "You will move in the direction of the people you meet. So it's important to get together with people who are better than yourself. The friends you have will shape you throughout your life. Make good friends, keep them for the rest of your life, but let them be people you admire and like”.

Virgin Group co-founder Richard Branson has personally benefited from a mentor-apprentice relationship. He first sought guidance from British airline entrepreneur Sir Freddie Laker as he struggled to get the multinational conglomerate Virgin Atlantic off the ground. "It's always good to have a helping hand at the beginning. I wouldn't have gotten anywhere in the airline industry without Sir Freddie Laker's mentorship," Branson said.

When Branson went in search of his mentor, due to his small advertising budget compared to other airlines, Laker did not hesitate and left him a phrase that forever marked the course of one of the most successful and extravagant entrepreneurs in history:

"Use yourself. Make a fool of yourself. Otherwise, you won't survive”.

Branson's face ended up being the image of the company to reduce costs.

"I would not have come to anything in the airline industry without the mentorship of Sir Freddie Laker, founder of Laker Airways," said Branson on his company blog. Laker was the source of inspiration in all aspects of the business during Virgin Atlantic's early years. "He helped to shape our vision of high quality service at competitive prices. He was the first to make me understand how much we would have to struggle with other airlines to succeed with ours," Branson explained in a Forbes magazine article.

Branson attributes much of his company's success to Laker's mentoring and admits that he "wouldn’t have gotten anywhere in the airline industry without Freddie's focused wisdom. It was him who told me to become the company face; advice that has influenced my entire approach to business”.

In his blog, Branson quotes American entrepreneur Zig Ziglar and says, "'A lot people have gone further than they thought they could go because someone else thought they could’. So go out and find the right mentor to help you along the road to success."

The stories of these great businessmen show us that success is not achieved in solitude. All entrepreneurs need a person to guide them on their way. The networking events and the accelerators are spaces to meet people in the sector and get in touch with them.

At Bcombinator we help companies grow and we have the help of mentors in different areas who can guide you to success. Would you like to be part of our community of entrepreneurs?