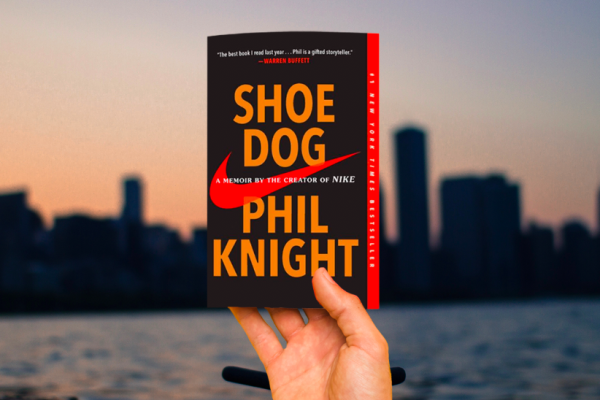 10 lessons we learnt from ‘Shoe Dog’, the autobiography of Nike’s founder

These days I have been able to read Shoe Dog (in spanish, Nunca Pares, meaning never stop), the autobiography of Phil Knight, Nike’s founder. Living the lives of others - even if only for a couple hours - is something I’ve always found to be interesting and a source of many lessons, and the creation of Nike could not disappoint me.

Reading the book is truly worth it; although I probably would have liked to find more learnings and less futile passages of his life, the ending is very powerful and the writing of the whole book is very very good.

But, what did I conclude after learning about the origin and growth of one of the most valued brands in the world? 10 things. Sorry if there is a lot.

1. The big businesses were very small and fragile at the time

Nike was not born Nike. It was originally Blue Ribbon and it was born out of Phil's concern to market sneakers in a time - the 60s - where sneakers were only for runners. ‘In 1965 running was not even considered a sport. It was something the freaks did. Running for pleasure, running for exercise, running for the endorphins, running to live longer and better was something unheard of’.

Blue Ribbon got a first representation of a very little-known Japanese brand in the United States at the time: Tiger (who revolutionized the market by adding a suction cup to the sole of running shoes because of Onitsuka - its founder - looking at the bottom of a octopus leg while eating a plate of sushi). During its first long years, Blue Ribbon could not even afford to have Phil on a salary.

2. The line between success and failure is very fine and luck also plays

‘Working hard is essential, a good team is essential, the brain and determination are invaluable, but luck can decide the outcome. Some would not call it luck, perhaps they would call it tao, logos, Jñana or dharma. The harder you work, the better your tao will be.’ But, you better have tao.

3. This life is for those who fight it

Nike was on the verge of bankruptcy on several occasions, with financial and cash problems until they decided to go public in 1980, and not only that, Tiger sued them and the US government too. But, in each blow - in each moment of despair - they knew how to react. "Someone may beat me, some banker, creditor or competitor may stop me, but I swear to God they will have to bleed to get me to stop." That is the spirit that caused you to probably be wearing a garment or sneakers from the Nike brand while reading this summary.

'It doesn't matter what kind of sport; It does not matter, in fact, the human activity that takes place: absolute effort always wins people's hearts.'

Phil had the opportunity to meet General Võ Nguyên Giáp at his 86 years of age, a Vietnamese general, who with only 162 cm of height managed to defeat the Japanese, French, American and Chinese in several wars, Phil asked him: 'How did you do it? 'His answer was:' I was a professor of the jungle. ' Professor for how much he had studied it to use it as a weapon against any invading country.

We all must be professors of the jungle.

‘The only thing we must do is work and study, study and work, as much as we can’.

5. Money is always secondary and what matters is the journey (and not the goal)

In business, money is energy. Not much more.

‘For the first time I considered that listing on the stock market was inevitable and sadness invaded me. Of course, we could earn a lot of money. But getting rich had never influenced my decisions and the other partners cared even less.’

In doing so. When going public… ‘I asked myself: What do you feel? It was not happiness. It was not relief. If I felt anything, it was... regret? Oh my God. Yes, it is regret. Because, honestly, I would have desired to start again.’

It's fun to read as he talks about his IPO that ‘A company called Apple also went public that week and sold the shares for $ 22. We were worth as much as they were. ’

The cowards never started and the weak died along the way. That leaves us, ladies and gentlemen. Us.

6. Purpose does not come the first day, it is built over time

In the early years, his athletics trainer and first partner, Bowerman, (who contributed $ 500 for 50% of the company) asked him 'if he knew, if he had the slightest intuition, what the labyrinth of sport shoes was, that he was making history, remaking an industry, transforming the way athletes would run, brake, and jump for generations. He asked him if he was aware at the time of everything he had done. Of everything he would do.’

It was with time that he began to imagine and visualize what the future of Nike could be like. In 1976, he had a thought: ‘People may start wearing them to go to class. It was quite a pretentious idea.

7. Having a common enemy helps a lot to channel and align energies

At Nike they despised Adidas, the undisputed brand and that over the years they managed to dethrone. ‘We were trying to finish off Goliath. We were fighting conformity, boredom and monotony. More than a product, we were trying to sell a concept, a spirit.’

Nike knew how to build an identity of rebellion, of overcoming. In one of her first advertising campaigns you could see a runner go down a secondary road and read ‘Winning against the competition is easy enough. Winning against yourself is an eternal commitment.’ So they always sought to sponsor players like Jimmy Connors, John McEnroe or Michael Jordan.

8. Passion is the starting point

Nike was founded by fans of athletics. Fans like Phil who did not miss a race and who, in their early professional years, hated to sell other products than sneakers: ‘Why was selling sneakers so different? Because I was not selling anything. I thought running was good. I thought that if people ran a few miles every day the world would be a better place and I was convinced that those shoes were the best for running.’

9. Companies are families too

Other types of families. But, families at last. Sometimes we blush when we think a company is - or can be - like a family. It's just work, isn't it? Well, that was not the spirit that got Nike to where it is today. ‘I thought about that phrase: They are just business. They are never just business. They never will be.’

‘The collaborators. The athletes we sponsor. They are all like children and brothers. Family.’ ‘We could say that everything has revolved around taking risks with people and creating a bond and a connection of another caliber.’

10. Many decisions do not have to be thought about much. They come from within

The name of Nike itself is one of them. When they got into a fight with Tiger they had to run their own brand and they had a deadline to send the name to the factory in order to produce. The brand was going to be Falcon or Dimension Six and at the last moment someone suggested Nike (from niké: victory in Greek), at the very moment of sending the telex to the factory; something that made Phil think that they should be called Nike was how much it impacted him to be in the Parthenon and to know about the goddess Athenea.

Phil ran the company for 40 years - saving distances, turning 20 next week on Multiplica - and made it the undisputed leader in the footwear and sportswear business with currently 30 billion euros in sales, 50% more than its eternal rival Adidas. Simply amazing.

By David Boronat
Founder and CEO of Multiplica, founder and director of Metriplica.